You are here: Home > Aptitude Test
All posts from ceed.iitb.ac.in 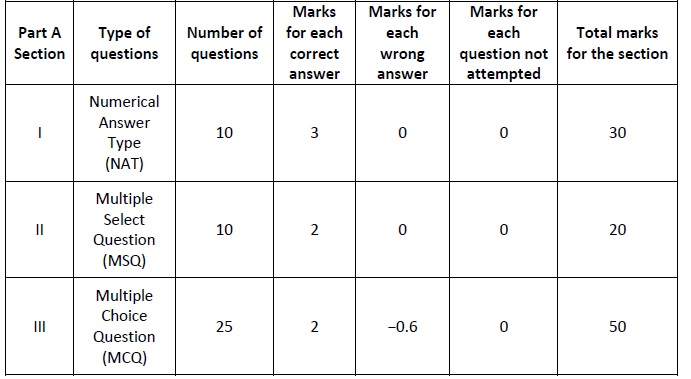 4. For each NAT question, the answer is a real number with decimal digits up to two decimal places. The answer needs to be entered using the virtual keyboard on the monitor. No choices will be shown for these questions. There is no negative or partial marking for NAT questions.

5. Each MSQ has four choices of which one or more is/are the correct answer(s). The marks will be awarded only if all the correct choices are selected. There is no negative or partial marking for MSQs.

7. Scribble pads will be provided for rough work for Part A. These have to be returned to the invigilator at the end of the Part A exam.

9. In Part B, colour pencils, crayons, sketch pens etc. may be used unless otherwise specified in the questions.

10.Charts, graph sheets, mathematical tables, calculators, mobile phones, and other electronic gadgets are not allowed in the examination hall.

Numerical :
Q.01 All the four-digit numbers except one is written using a single font. Identify the number that does not use the same font as the other numbers.
Q.02 Find the number which will replace the question mark.
Q.03 An intersection is a point where two or more lines/curves meet or cross. How many intersections are there in the figure given below?
Q.04 How much distance (in cm) will the bicycle shown below travel, if the pedal makes 1.5 revolutions? (Assume p = 22/7).
Q.05 How many glasses will remain empty if you half-fill some of the empty glasses, from the given set of filled glasses?
Q.06 Two perspective views of the same solid object are shown below. How many surfaces does the object contain? Assume hidden surfaces to be flat.
Q.07 Two water tanks A and B of equal square base of sides 3 feet are shown below. Water flows from tank A to tank B through a tube. What will be the volume (in cubic feet) of water in Tank A when the water stops flowing?
Q.08 A solid is shown in the figure below. The vertices ABCDEFGH form a 4 cm × 2 cm × 2 cm cuboid. The segments AI and DI are both of length 5 cm, and points ICGFB are coplanar. What is the height (in cm) of point I from the base rectangle EFGH?
Q.09 The figure shows the front view of a convex lens, which originally had only one edge. Five holes of different shapes, namely triangle, square, pentagon, hexagon and circle, were drilled through it at points P, Q, R, S and T in such a way that the holes were parallel to each other, perpendicular to the edge and all the holes were still within the lens edge. What is the total number of edges in the lens after the holes were drilled?
Q.10 In terms of calories, 20 jamuns and 3 bananas combined are equivalent to one mango and one papaya combined, and 2 mangoes and 5 bananas combined are equivalent to 4 papayas and 80jamuns combined. Then 8 papayas and 2 mangoes are equivalent to how many bananas?

Q.13 If you are asked to draw the following four figures with the following constraints: They must be drawn in a single stroke (without lifting the pen from paper), and each line is drawn only once. Which of the options can be drawn?

Q.15 Four square table-tops of the same dimensions are shown below. Only the designs of their supports are different from each other. If a person stands upright on the red mark on each of the table, which of the tables will topple?
Q.16 A glass cube with 27 equal compartments is filled with water. There are a few red balls floating inside the compartments. Three views of the cube are shown below. Identify the red ball(s) that is/are represented incorrectly in the top view.
Q.17 Which of the options is/are simple rotations of the figure given below?
Q.18 Which of the following drawings illustrate(s) the use of the animation principle of “Squash and Stretch”?

Q.20 If all the lines in the image below are of the same length but of different thickness and are drawn in perspective with respect to their distance from the viewer, which of the following statements will be TRUE?
A. Line 1 is the thickest line of all
B. Four lines are of same thickness
C. Line 2 and line 3 have same thickness
D. Line 3 is the closest line of all to the viewer

Multiple Choice Questions
Q.21 Identify the correct font used for Parle-G biscuits.
Q.22 Identify the option that will replace the question mark.
Q.23 Identify the option that will replace the question mark.
Q.24 Shahid is feeling very sleepy. He yawns and stretches. Identify the correct image.
Q.25 Which is the correct representation of the posture of a house lizard as it climbs a wall?
Q.26 Which of the given configurations of Palki (Pallanquin) will work the best for the traveller as well as for the labourers carrying the traveller?
Q.28 From a 3-dimensional structure made of cubes, eight rows of cubes have been removed as shown below. Select the correct pattern that will emerge from the side shown with an arrow.
Q.30 A square paper is folded and cut as shown below. The paper is then used as a template to spray-paint a white wall with black paint. Which pattern would be created using this template?

Q.39 A solid created by rotating a planar-shape about an axis is called a “Surface of Revolution”. The figure below shows a shape and the axis of revolution which is used to create such a solid. Which of the options would be the correct top view of this solid?
Q.40 Identify the option that will replace the question mark.

Q.41 A 3D illusion painting is created on a road. Shown on the left is how it appears to a viewer in perspective. If this illusion has to be sketched on paper, before it is painted, which one of the options on the right would be correct?

Q.42 Fill in the blanks to keep the sentence grammatically correct as well as meaningful. ……….. the facts, she proceeded with her decision, finally ending up with a …………. situation.
A. Nevertheless, happy
B. Apparently, initially
C. However, noteworthy
D. Notwithstanding, sad

Q.1 Industrial Design
During the monsoon season, drying of washed clothes at home takes a long time. The interior of the house is usually very damp. It is observed that people tend to spread the wet clothes on a chair or other furniture below a ceiling fan, to dry them. Such temporary arrangements help them cope with the problem.

A leading fan manufacturing company sees a business opportunity. The company approaches you to design a product for drying clothes. The manufacturer proposes to sell this product (which is to be used during monsoons) along with a fan. The manufacturer wants the following objectives to be met in the design:

a) The product uses a fan for drying clothes.
b) The fan must be integrated with the product during its use in rainy season and must be usable as a “normal fan” during other seasons.
c) The product should be foldable and compact for storage. Design the product as per the objectives listed above.

2. List ten critical factors (key words only) you will consider for designing. (10 marks) Evaluation Criteria: Understanding of the situation and product use.

3. Select one of your ideas and develop it into a final product. Make a neat sketch of the same. Indicate all the parts, material and features on this sketch. (20 marks) Evaluation Criteria: Sketching quality, details, product features and usability issues.